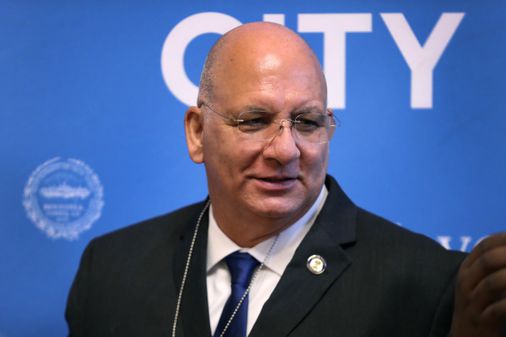 Previous commissioner Willie Gross retired abruptly on Thursday, Jan. 28. His successor Dennis A. White — Gross’s longtime colleague and chief of staff — was announced the same day. He was sworn in at Faneuil Hall on Monday, Feb. 1.

Then on Wednesday, Feb. 3, Walsh placed the new commissioner on leave following Globe inquiries about a 1999 allegation of domestic violence.

“These disturbing issues were not known to me or my staff, but should have been at the forefront,” said Walsh, who was in Washington, D.C., for his nomination hearing.

No kidding! Now there’s an inquiry into the allegations that White pushed and threatened to shoot his then-wife, also a Boston police officer, and was later ordered to stay away from his family. The Globe found no evidence that White had been charged with a crime, and he denied the allegations in court filings at the time. We don’t yet know what an independent investigator will conclude after sorting through court documents and memories of that time, or whether what she finds will be disqualifying — though obviously a police commissioner should have to clear a very high bar.

Here’s what we do know: Walsh rushed a guy into one of the city’s most important jobs — at a moment that could hardly be more crucial for policing and Boston — without properly vetting him.

Why the hurry? In the absence of an explanation from Walsh, who declined to comment here, we’re left to speculate. Perhaps he didn’t trust the decision to City Council President Kim Janey, who will be acting mayor when he leaves for Washington, or to whoever might succeed her after this year’s mayoral election. Perhaps Walsh took counsel from Gross, who recommended a friend who had risen through the ranks for the last 20 years without incident. White is also well-regarded by some advocates for better policing. A member of the city’s police reform task force, he has been far more receptive to change than Gross ― and less defensive in the face of criticism from the community.

Some reform advocates have suggested old-school types in the Police Department dropped a dime on White to stave off change. Though there are many in the department who undoubtedly want to maintain the status quo, there was no dime here: Globe reporters uncovered the 1999 incident on their own, via old fashioned reporting, tracking down documents city officials could have found, were they so inclined.

So there’s no way to be sure, absent the kind of outside investigation now underway, whether White got a similar break from his colleagues.

Reforms which White himself supported after last year’s protests against police brutality would clarify such murkiness going forward: The city’s new independent Office of Police Accountability and Transparency will investigate complaints against Boston police. And a new state review commission will also require police departments to report misconduct complaints and investigations.

There’s also a bigger issue highlighted by the mess White’s appointment has become: We ought to be choosing police commissioners in Boston as carefully as we choose school superintendents, for whom we conduct national searches and solicit public input.

“When we hire a superintendent, we have learned the need for an open and fair process, so the public can have trust,” said Carol Rose, head of the American Civil Liberties Union of Massachusetts. “How much more so do we need that with the police?”

Way more. Wisely and slow. It would have saved the city and Walsh from this scar on his tenure — this giant stumble on the way out the door.