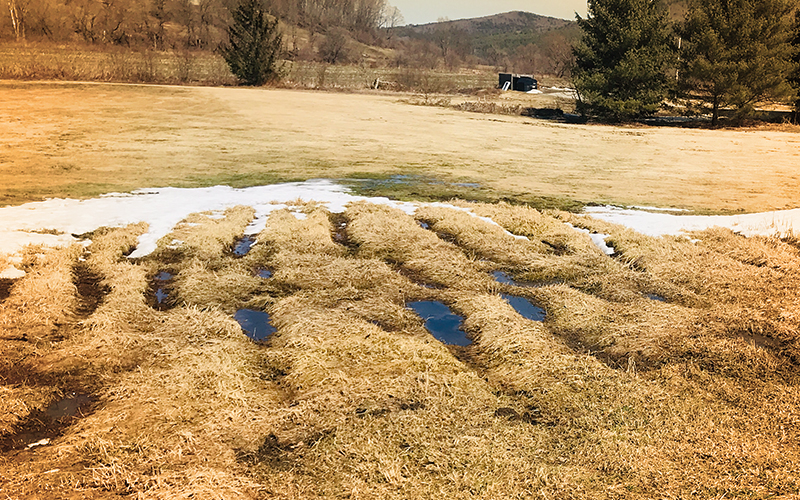 A public health emergency has been declared due a failed leach field at the VerdMont mobile home park on Tremblay Road in Waitsfield.

Town health officer Fred Messer filed that order on March 24 after briefing the select board on the issue on Monday, March 22. Messer, who is also a member of the select board, told fellow board members that there is standing effluent in the field where the leach field is and said he’s been monitoring this situation for several years.

The park is managed for the Central Vermont Land Trust by Downstreet Housing and Community Development.

“If you park by the Village Woods road sign, you can see standing effluent on the ground and in puddles all over the place with green growth and dark matter seeping from the field,” Messer told the board.

‘It’s been happening for some time now,” he added.

Messer said that the issue is not new and told the board that for several summers there have been places in and around the leach field that could not be mowed due to seepage.

With town administrator Trevor Lashua sharing his screen during the board’s Zoom meeting, Lashua pointed out a drainage ditch near the back of the leach field that Messer said runs into the Mad River. Further, Messer noted, the failed field is within 60 feet of one of the town’s municipal water transmission lines.

“The leach field is all downhill to that ditch. Go to Google Earth to see that square of the leach field as well as the area where they can’t mow,” Messer said.


Messer said he had been trying to get the issue addressed for several years. He said that he met with Lashua and Downstreet in the fall of 2019 when Downstreet representatives promised to meet with him in 2020. They never contacted him.

“It’s been failed for a long time. I was hoping they’d do the right thing and fix it,” Messer said.

Messer filed a report with the state on March 16 to report the failed system and the health issues it presented. He followed up on March 22 with some voicemails. As the town health officer, Messer can issue an emergency health order that would require Downstreet to pump the tank and not allow any liquid into the leach field until it is replaced.


Board members discussed the issue and that fact that the failed system doesn’t just pose a threat for the river, but also for the tenants who live in the park. Board members suggested the best way to get compliance is to issue the emergency order and also give Central Vermont Land Trust notice that it was being issued.

“I agree. That’s good advice. There’s a level of frustration here because I’ve tried so hard to work with these people,” Messer said.

Messer also alerted the board to the dumpsters at VerdMont, calling the trash collection area “a hideous mess” and noting that the dumpster station is overflowing and has been for a long time.

‘This is Jim Crow in the 21st Century’