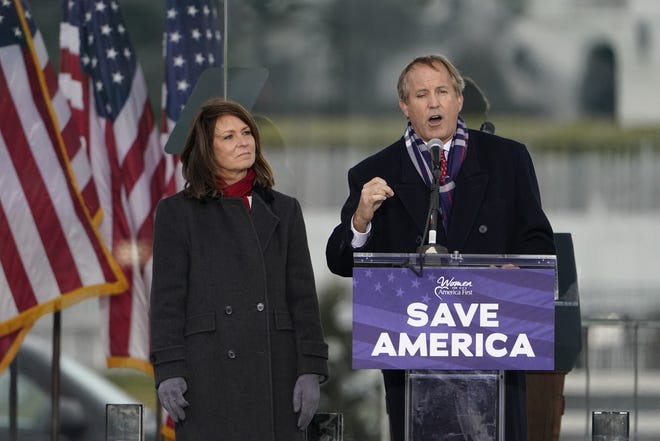 The Texas attorney general’s office is attempting to withhold all messages Ken Paxton sent or received while in Washington for the pro-Donald Trump rally that devolved into a riot at the U.S. Capitol.

Several news organizations in Texas have requested copies of the attorney general’s work-related communications. The Texas Public Information Act guarantees the public’s right to government records — even if those records are stored on personal devices or online accounts of public officials.

After Paxton’s office refused to release copies of his emails and text messages, the Austin American-Statesman, Dallas Morning News, Houston Chronicle, San Antonio Express-News, ProPublica and Texas Tribune worked together in an effort to obtain the documents and review Paxton’s open-records practices.

The news outlets discovered that Paxton’s office, which is supposed to enforce the state’s open records laws, has no policy governing the release of work-related messages stored on Paxton’s personal devices. It is unclear whether the office reviews Paxton’s email accounts and phones to look for requested records, or whether the attorney general himself determines what to turn over without any outside checks.

Paxton is now facing some of the most intense public scrutiny of his career. The Republican attorney general is under federal investigation for allegedly abusing his office to help a campaign donor. He also led a failed attempt to overturn the presidential election, joining with other GOP attorneys general in a lawsuit seeking to invalidate swing state victories by Democrat Joe Biden.

A spokesman for the attorney general’s office said the agency follows the Texas Administrative Code, which specifies how long agencies have to hold on to records but is distinct from the open records law.

He did not answer reporters’ questions about whether Paxton is given free rein to determine which of his communications are public and which are confidential under these rules.

On Jan. 6, Paxton spoke at the pro-Trump rally in Washington. Appearing with his wife, state Sen. Angela Paxton, R-McKinney, the attorney general touted his unsuccessful legal effort to overturn the presidential election.

“What we have in President Trump is a fighter,” Paxton told the crowd of Trump supporters. “And I think that’s why we’re all here. We will not quit fighting. We’re Texans, we’re Americans, and the fight will go on.”

Members of the crowd, stirred up by false claims of voter fraud, later that day stormed the Capitol, fought with riot police and threatened lawmakers.

Five people died in the violence, including a Capitol Police officer.

Paxton later falsely blamed the violence on antifa, a left-wing anti-fascist movement, and claimed Trump supporters weren’t responsible for the insurrection. Federal prosecutors have charged more than 300 people in connection with the riot and alleged that some have ties to white supremacy groups. FBI Director Christopher Wray said investigators found no evidence that members of antifa attacked the Capitol.

Amid a massive FBI investigation into the Capitol riot, the public has been eager to understand why and how their elected officials attended the rally. Paxton has refused to release his communications about the event, which could illuminate his real-time reaction to the riot, who booked him as a speaker for the rally and who covered his travel expenses.

As Texas attorney general, Paxton oversees an office of lawyers who determine which records are public or confidential under the law. Any government body in Texas, from police departments to the governor’s office, must seek the agency’s approval to withhold records from the public.

The Houston Chronicle and The Dallas Morning News have requested all of Paxton’s messages from Jan. 5 to Jan. 11. Lauren Downey, the public information coordinator at the attorney general’s office, said she didn’t need to release the records because they are confidential attorney-client communications.

The open records division has 45 business days to issue a ruling on whether the communications should be open to the public. That decision is pending.

James Hemphill, a lawyer and open records expert who serves as a board member of the Freedom of Information Foundation of Texas, said the records described by Downey appear to fall under confidential communications. But it’s odd, he added, that Paxton would have no other routine emails or texts during that six-day period that could be released.

“It would seem unusual for every single communication made by any kind of lawyer to be subject to attorney-client privilege,” Hemphill said, cautioning he hasn’t seen the records himself.

Downey also told the Chronicle that the attorney general’s office does not have any written policy or procedures for releasing public documents stored on Paxton’s personal devices or accounts.

The Morning News filed several other requests for Paxton’s communications regarding his Washington trip, including messages sent over encrypted apps.

The agency said there were no public records that fit that description. When the newspaper asked for Paxton’s communications with his senior adviser and an executive assistant who usually plan official travel, Downey said, yet again, there were no records to release.

“The (attorney general’s office) did not coordinate or pay for General Paxton’s trip to Washington, D.C., in early January. Thus, our office has no information responsive to your request,” Downey said.

Paxton has not answered questions about who paid for his trip.

In a recent legislative hearing, the attorney general did not directly answer questions from state senators about whether he spent any taxpayer money on the travel.

“I didn’t spend money personally,” he said. Paxton added he had official business in Washington the week of the rally, when he met with federal officials about a Medicaid program.

“I had a state purpose,” Paxton said. “The next day I had meetings at the White House. …That’s how I spent most of my time.”

Paxton’s agency has released other top staffers’ communications related to the trip.

The agency released some of Webster’s emails and texts from that month, including logistical planning for the Washington trip.

In other recent instances, the responses from Paxton’s agency raised questions about the attorney general’s own record-keeping practices.

For example, the Morning News requested communications from Utah about the attorney general’s trip to that state last month during the winter power outages in Texas.

In response, Utah officials released a screenshot of a few texts exchanged between Paxton, Utah Attorney General Sean Reyes and a third unnamed individual discussing their plans. The messages were taken from the unnamed individual’s phone, not Reyes’ or Paxton’s.

When the newspaper made the same request to the Texas attorney general’s office, officials turned over a copy of the screenshot that Utah provided — not one showing the exchange on Paxton’s device.

Downey said Paxton provided the record, but she did not answer questions about how Paxton searched his accounts or whether anyone in the office confirmed the results of the records search.

“The Office of the Attorney General is in full compliance with the Public Information Act,” Downey said.

A Morning News reporter also texted a work-related question to Paxton’s cellphone in February and the newspaper later requested all text messages related to state business sent to that number on that same day.

The Texas attorney general’s office said there were no messages. When asked why the Morning News reporter’s text wasn’t turned over, a spokesman suggested they did not need to keep it.

Sarah Swanson, general counsel for the Texas State Library and Archives Commission, said state agencies are responsible for adopting their own records-retention schedules. But if texts are exchanged while conducting state business, Swanson said, those messages are considered government records and might need to be kept for an “appropriate amount of time,” depending on an agency’s policy.

Garcia did not answer follow-up questions about how the attorney general’s office determines which text messages are unwelcome or unsolicited.

But the agency’s own rules include a clear warning: Don’t destroy any records subject to public information requests.

Chuck Lindell with the American-Statesman and Jeremy Schwartz with Pro Publica and the Texas Tribune contributed to this report.