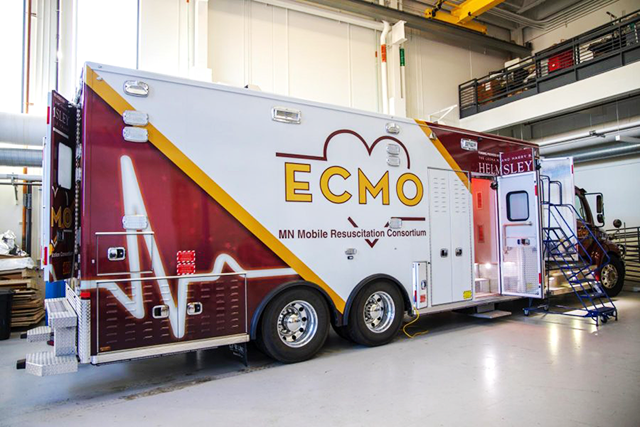 It was the night of the first presidential debates of 2020, and Eric Groettum, a married construction worker from Eagan with three kids, wasn’t feeling great.

“I was watching TV,” he said. “I was up until midnight or 1. For most of that day I was feeling a little off, almost like I had indigestion.” Maybe, Groettum figured, his upset stomach had to do with the political turmoil he was watching on the screen, but even after he’d shut off the TV, he kept feeling worse.

To help himself feel better, Groettum went to the bathroom, took a shower and downed some antacids. Nothing was helping, so he told his wife Tarah that he was going to bed.

At 3 a.m., Tarah woke up to the sound of her husband making what she describes as “weird, gurgling noises.” It turned out that he was having a seizure brought on by a cardiac arrest, but at the time she didn’t know what was going on. Frantic, Tara called 911.

When the paramedics got to the Groettums’ home, they discovered that Eric’s heart had stopped beating. They attempted to restore a normal rhythm with shocks from an AED, but his heart was not responding.

Not so long ago, this story could’ve had a tragic ending. But the paramedics who arrived on the scene knew about a lifesaving option called ECMO, or extracorporeal membrane oxygenation, a peripheral bypass machine that removes blood from a patient’s body, gives it oxygen and returns it to the patient’s heart and lungs, giving the heart a chance to recover and eventually return to normal function.

The ambulance brought Groettum to M Health Fairview Southdale Hospital, where he was met by a mobile ECMO team who put him into an induced coma and connected him to ECMO, saving his life.

Groettum doesn’t remember anything about his treatment.

“The next thing I know I woke up in the hospital,” he said. “It was three weeks after my cardiac arrest. I remember asking the nurse where my wife was. I stood up and damn near fell on my face. The nurse said, ‘Sir, you can’t be doing that.’ I asked, ‘Why?’ She said, ‘You had a major heart attack.’ I had no idea what she was talking about.”

In 2015, Minnesota’s first ECMO program for cardiac arrest was located at M Health Fairview University of Minnesota Medical Center on the university’s Minneapolis campus. While ECMO can work miracles, restoring life and health to patients whose hearts have ceased to function, the technology can only help if a patient can be connected to the machine as quickly as possible, explained Kim Harkins, program manager at the University of Minnesota’s Center for Resuscitation Medicine.

Groettum’s cardiac arrest, Harkins explained, was the type where repeated shocks did not restore normal rhythm to his heart. When paramedics determined that the shocks were not working, she said, “they quickly decided that they he needed to get ECMO. There is a high likelihood that without ECMO, Eric would not have survived.”

Jason Bartos, M.D., president of the Minnesota Mobile Resuscitation Consortium (MMRC) and assistant professor of medicine at the University of Minnesota Medical School, explained that when it comes to cardiac arrest, time is of the essence. Every minute without blood and oxygen circulation equals damage to the heart and other organs. A quick connection to ECMO drastically improves patient outcomes.

“Once we get people on ECMO support,” Bartos said, “everybody has a chance to do well.”

Because they knew that ECMO saves lives, Bartos and his colleagues at the university wanted to make this tool available to as many Minnesotans as possible. The only problem was that it sometimes took too long to get patients who’d experienced serious cardiac arrests like Groettum’s to a hospital with ECMO capabilities. Anything longer than a 30-minute trip could cause irreversible organ damage or even death.

In 2020, Bartos and Demetri Yannopoulos, director of the Center for Resuscitation Medicine and a professor at the University of Minnesota Medical School, published a study in EClinicalMedicne that demonstrated the importance of quick ECMO treatment for cardiac arrest.

“If people got to us in 30 minutes, 100 percent survived,” Bartos explained. “But every 10 minutes thereafter we lost 25 percent more people. Time is absolutely critical.”

If they could develop a way to get ECMO to patients as quickly as possible, Bartos and Yannopoulos figured, they could save even more lives. Why not put the equipment on a truck that could be driven to meet the patient, shortening the time it took for them to get the treatment they so desperately needed?

Inspired by the promise of Bartos’ and Yannopoulos’ research, officials from the Leona M. and Harry B. Helmsley Charitable Trust awarded the Center for Resuscitation Medicine an $18.6 million grant to fund the creation of a truck outfitted with medical equipment and virtual reality technology to attend to patients remotely for EMCO. The truck further extends the program’s reach, bringing the emergency room to cardiac arrest patients.

Walter Panzirer, Helmsley trustee, said that the charitable trust wanted to support the University of Minnesota’s work to expand the reach of this lifesaving technology to people around the state, and eventually the region. “We want to assist them so they can expand their footprint and reach as many people as possible,” he said.

Groettum’s story is, Bartos said, “quite classic for our mobile ECMO program,” and a good example of how expanding the reach of this service can save lives. On that fateful morning, when paramedics determined that Groettum would be a good candidate for EMCO, they contacted a dispatcher who called MMRC and alerted staff that there was a patient in need of treatment.

“We drove to Fairview Southdale and met him there,” Bartos explained. “Our team got there minutes before the paramedics got arrived, which is what we shoot for.” The ECMO truck is set up like an emergency room, Bartos said, and ready for the team to spring into action: “We were all there, standing in our places like a pit crew, and the patient was brought in by the paramedics who put him on the table. Then we go into action.”

In the days before the MMRC truck, the program’s reach was limited to people who were located relatively close to the Twin Cities.

“The program was based around the University of Minnesota,” Bartos said, “and our patients were within 30 minutes of the university. In those cases, we could bring them in with ongoing CPR and give them a chance to fix what was going on with their heart.” People whose cardiac arrests occurred farther than 30 minutes away from Minneapolis had much lower chances of survival.

“The quicker people can get to us for ECMO, the better,” Bartos said. “That’s where the mobile program comes from. By getting them to us faster, we extend our reach.” The truck, he explained, can leave its base and travel to a location closer to the patient. “With the mobile program, we trimmed eight minutes off our times to ECMO. If you live in Stillwater, say, now we can consistently get to you.”

Officials from the Helmsley Trust met with Yannopoulos and Harkins to find out more about their work and to determine areas where grant could help extend ECMO’s reach across a greater portion of state.

“We had been invited to talk to the trust about new opportunities, and the mobile program was one of them,” Harkins said. “It was the program the Helmsley Trust was the most interested in, because they had seen so much success in this area at the university. To expand such a successful program was an opportunity to do greater good for a larger geographical area.”

The “greater good” of MMRC’s expanded reach feels particularly significant to Bartos. “Taking this program mobile is worth it,” he said. “One of our mottos for all of this is, ‘The quality of your health care should not be based on where you live,’ and with this program, we’ve proved that can be true.”

Over the months since his cardiac arrest and ECMO treatment, Eric Groettum has seen his life slowly return to normal.

“I’m doing amazing, actually,” he said. “I’m back to work. I didn’t really skip a beat. I lost a lot of muscle mass in the hospital and gained a lot of fat since I’ve been out, but I went back to work recently, two weeks ago.” Groettum frames houses for a living, and he’s been happy to be back on the job site. “I’m on light duty now, but I’ll be back to regular duty soon enough.”

While Groettum admits that recovering from a cardiac arrest and a three-week induced coma is far from a walk in the park, the speedy connection to ECMO gave his heart and body the time it needed to heal. Without that connection — which happened, Bartos said, within “something like seven minutes from the time he arrived and when we got him on ECMO” — Groettum (if he’d even survived), would have had to cope with serious damage to his heart, and to the rest of his body.

The Groettums, who have been married for 14 years, were high-school sweethearts. They have a deep, lifelong connection that goes back decades, Eric said, to when Tarah was 17 and critically injured in a car accident.

At the time of Tarah’s accident, Eric was far away in Colorado, but somehow he knew something was wrong with his friend.

“I don’t know how else to explain it, but I felt like something was wrong with the world,” he recalled. “We weren’t together at that time, but I called everybody I knew and asked, ‘Is something wrong? I found out it was Tarah. She was in the hospital fighting for her life.”

Groettum sees signs of that deep connection in Tarah’s speedy response to his cardiac arrest.

“I owe my life to her,” he said. With Tarah’s love — and the support of family, coworkers and medical professionals — he’s on his way to a healthy recovery. “I understand that the brain can’t go without oxygen for so long, otherwise you pretty much come out as a vegetable,” he said. “It’s a good thing that didn’t happen to me.”

Bartos said seeing patients like Groettum and hearing their plans for their future are the best part of his work.

“For me the lost sleep, the years of dedicating my life to this, are worth it. I have the honor of seeing these people in clinic. They say their lives are back to normal. They are with their kids, they’re back to work, living their best life because of what we did. That really brightens my day.”